The sad tale of Ross Ulbricht and his on-line drug bazaar called Silk Road is a good study of the outer limits of how far rationalization can carry a person.

It is also a frightening illustration of Jeremiah 17:9. From the New International Version, ponder:

The heart is deceitful above all thing and beyond cure. Who can understand it?

Considering the tale of Silk Road is useful for accountants wanting to learn about the outer fringe of the internet and he investigative power of the federal government, believers who would like an illustration of the frightening level of deceit that lives in the human heart, and anyone else wanting to learn more about the dark worlds that normal people will never see.

My posts are gathered into two collections on my other blog, Outrun Change:

END_OF_DOCUMENT_TOKEN_TO_BE_REPLACED

This is the 9th and final part of a discussion of Silk Road, as discussed in American Kingpin: The Epic Hunt for the Criminal Mastermind Behind the Silk Road, written by Nick Bilton. For the longer story, you may enjoy reading parts one, two, three, four, five, six, seven, and eight.

Other thoughts on the book

If you have previously been following the Silk Road story, you will enjoy the book. It reads like a good detective novel, except it is all true.

The book describes the mutual low opinion held of other federal agencies by the staff of most of the federal agencies that had a part in the investigation. This is not the first time I’ve read of those attitudes or heard of poor cooperation across agencies.

A couple of the reviews at Amazon indicate there is minimal technical detail in the book. That is absolutely the case.

END_OF_DOCUMENT_TOKEN_TO_BE_REPLACED

This is part 8 of a discussion of Silk Road, as described in American Kingpin: The Epic Hunt for the Criminal Mastermind Behind the Silk Road, written by Nick Bilton. To learn how these three individuals earned an extended stay in federal housing, you may enjoy reading parts one, two, three, four, five, six, and seven.

In good ol’ Dragnet style, where are bad guys now?

Here is the info from the federal Bureau of Prisons website:

END_OF_DOCUMENT_TOKEN_TO_BE_REPLACED

Two of the feds working on the Silk Road investigation went rogue. That did not turn out well for them.

This is part 7 of a discussion of Silk Road, as described in, American Kingpin: The Epic Hunt for the Criminal Mastermind Behind the Silk Road, written by Nick Bilton. Check out parts one, two, three, four, five and six, if you wish.

Since the book was written, there have been more developments. I stumbled across the additional info after drafting this series of posts.

Let’s take a look at how things turned out for the two crooked federal agents.

What did the two feds do and what did they get for their trouble?

END_OF_DOCUMENT_TOKEN_TO_BE_REPLACED

How far did he go?

So as a result of running the drug bazaar called Silk Road, where did Ross Ulbricht wind up with his efforts to forcibly legalize drugs and simultaneously remove God from His throne and take over the throne for himself?

What did he get for his efforts? The feds claim he had tens of millions of dollars in his personal accounts.

(This is part 6 of a discussion of Silk Road, as described in, American Kingpin: The Epic Hunt for the Criminal Mastermind Behind the Silk Road, written by Nick Bilton. Check out parts one, two, three, four and five, if you wish.)

He ran a web site at which he knowingly sold to anyone who could pay:

He also contracted for and paid for what he thought was the murder of five people who offended him.

END_OF_DOCUMENT_TOKEN_TO_BE_REPLACED

This is the second of two posts describing the frightening power of rationalization on display in the story of Ross Ulbricht, also known as Dread Pirate Roberts, as he developed the Silk Road website where you could buy anything you wanted. The story is told in American Kingpin: The Epic Hunt for the Criminal Mastermind Behind the Silk Road, written by Nick Bilton. This is the fifth post in a series. You may enjoy reading parts one, two, and three.

You might want to read part four before diving into this wrap-up of the rationalization discussion.

How can body organs be okay?

Shall we extend this discussion into body organs?

I have a real problem with thinking that organ providers in China gave informed consent.

Maybe I’m missing the boat or maybe just can’t stretch my brain far enough, but I don’t see how libertarian concepts can be used to justify the sale of either hand grenades, rocket launchers, or livers & kidneys. That seems to be a rationalization to do what you otherwise feel like doing.

There is even more rationalization in play.

How do beatings and torture fit in?

END_OF_DOCUMENT_TOKEN_TO_BE_REPLACED

The frightening power of rationalization is clearly on display in the story of Ross Ulbricht, also known as Dread Pirate Roberts, as he developed the Silk Road website where you could buy anything you wanted. The story is told in American Kingpin: The Epic Hunt for the Criminal Mastermind Behind the Silk Road, written by Nick Bilton. This is the fourth part of a series. You may enjoy reading parts one, two, and three.

How did Dread Pirate Roberts get to the point where he allowed the sale of every imaginable drug, various explosives, and a range of body parts on the site he created and ran? How did he get to the place of hiring and paying for five assassinations?

END_OF_DOCUMENT_TOKEN_TO_BE_REPLACED

Let’s see where he ended up with this Be-Your-Own-God routine.

The feds busted one recipient of a pound of cocaine.  He was a moderator on the Silk Road site. The feds kept this guy under wraps.

Dread Pirate Roberts, who also went by DPR, concluded that this person, who worked for Silk Road, had absconded with the dope and dropped out of sight. The feds gained control over the guy’s computer.

(This is part 3 of a discussion of a book on Silk Road, American Kingpin: The Epic Hunt for the Criminal Mastermind Behind the Silk Road, written by Nick Bilton. Read parts 1 and 2. Since writing the initial draft of this series, I’ve added two more posts and another 700 words.)

An undercover fed pretending to be a big time drug dealer was in contact with DPR.  So during their conversations, DPR happened to complain that someone had ripped him off. This undercover cop offered to send some of his goons over to rough up the guy.  DPR agreed to have his correspondent get some of his guys over there to work over the double-crosser.

So Carl Force of the U.S. Drug Enforcement Agency and Shaun Bridges of the United States Secret Service pretended to torture this guy for DPR’s benefit by actually torturing the guy, taking pictures as they repeatedly dunked his involuntarily cooperating head in a bathtub full of water.

END_OF_DOCUMENT_TOKEN_TO_BE_REPLACED

While developing Silk Road, Mr. Ulbricht had a girlfriend, whom I won’t name. She knew he was raising and selling dope on the website and broke up when he would not end his involvement with the site.

(This is part 2 of a discussion of a book on Silk Road, American Kingpin: The Epic Hunt for the Criminal Mastermind Behind the Silk Road, written by Nick Bilton. Part 1 here.)

His girlfriend came to a saving faith in Jesus Christ as her Lord and Savior later in the book, well after they broke up. (Based on a few ways that the description of her conversion and faith are described, I will make a wild guess the author of the book is not a believer).

At one point when they got back together for a while, his girlfriend persuaded him to attend worship at what appears to be a charismatic congregation that operated without a formal pastoral leadership structure.

After the worship she asked him what he thought about the morals that were discussed during the worship service.

END_OF_DOCUMENT_TOKEN_TO_BE_REPLACED

What is the relative moral ranking of people selling the following illegal products:

Early in the growth of the Silk Road, which was a hidden place on the internet where you could buy anything you wanted, and I mean aaaaanything imaginable, a debate emerged about the outer limit of products that would be allowed on the site.

The website was set up and run by Ross Ulbricht. Ultimately the feds busted him, his senior staff, and another couple hundred people who worked for Silk Road or sold stuff there.

END_OF_DOCUMENT_TOKEN_TO_BE_REPLACED

CCH (Wolters Kluwer) makes the material for some of its courses available for no charge.

If you want CPE credit there is a fee for grading the exam and awarding credit. However, if your goal is learning the materials are available gratis.

As I write this post, the following materials available:

END_OF_DOCUMENT_TOKEN_TO_BE_REPLACED

A 21 page e-book, Protecting our Ministry with Integrity, is available from Church Law & Tax, which is the writing platform for Richard Hammar. If you are new to leadership in the church world, he is one of the leading writers on legal issues in the community.

At the price of signing up for future sales pitches (when you consider the quality of the resources available, that is a really low cost), you can read about: END_OF_DOCUMENT_TOKEN_TO_BE_REPLACED

I’ve dropped the prices for the print copies of my books available at Amazon, Barnes & Noble, and iTunes store.

Here is what you can find on-line:

Story of Scott London’s fall from regional audit partner at KPMG to prison inmate because of his insider trading.

END_OF_DOCUMENT_TOKEN_TO_BE_REPLACED

The Evangelical Council for Financial Accountability is graciously making two resources available for the really low price of registering at their website.

As you ponder doing so, you really ought to register at their site. They provide a variety of information even for those who merely register. If you do that, which already makes sense, then the books free.

END_OF_DOCUMENT_TOKEN_TO_BE_REPLACED

Both books in my Tragedy of Fraud series are now available in print format from Amazon. 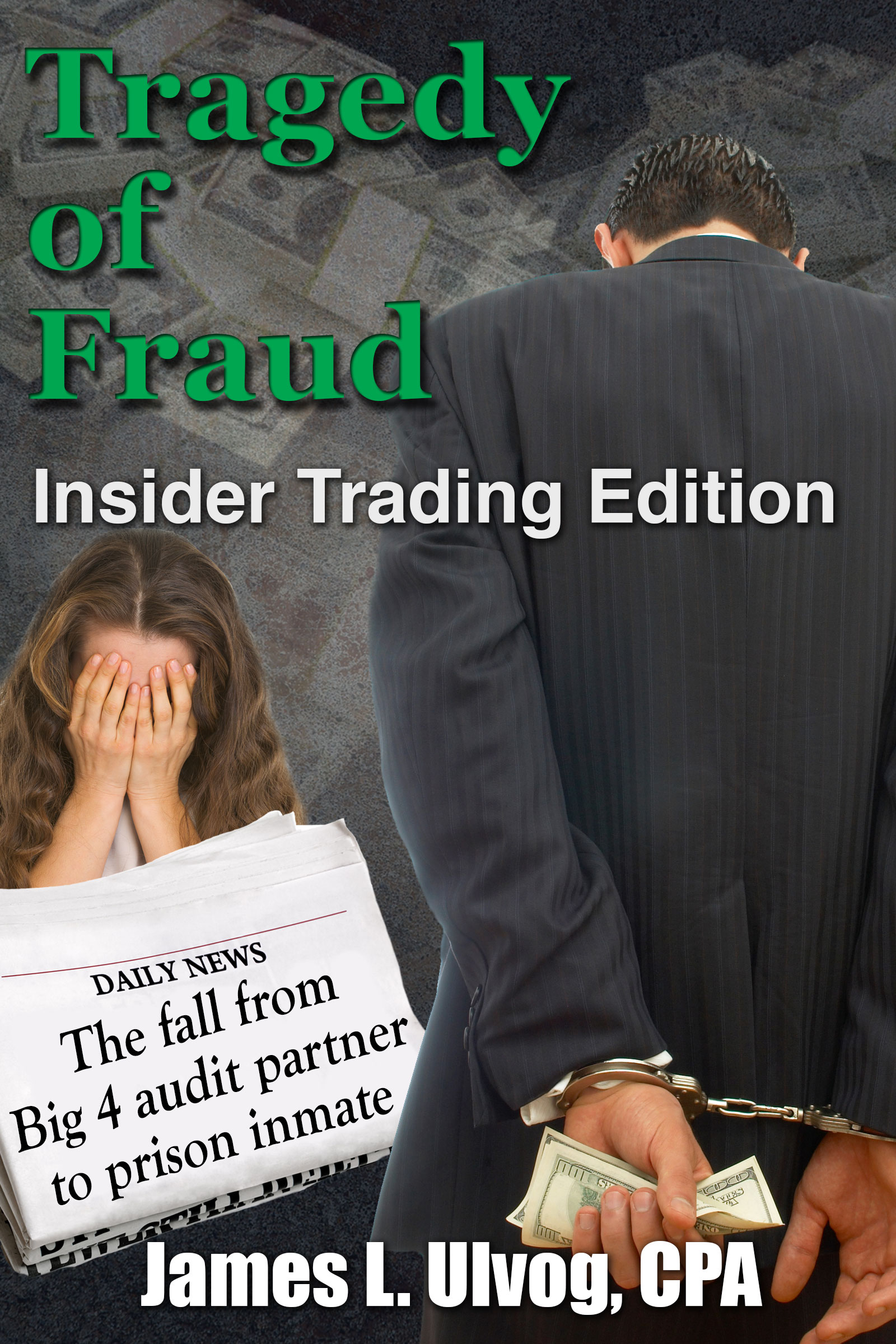 First book in the series: 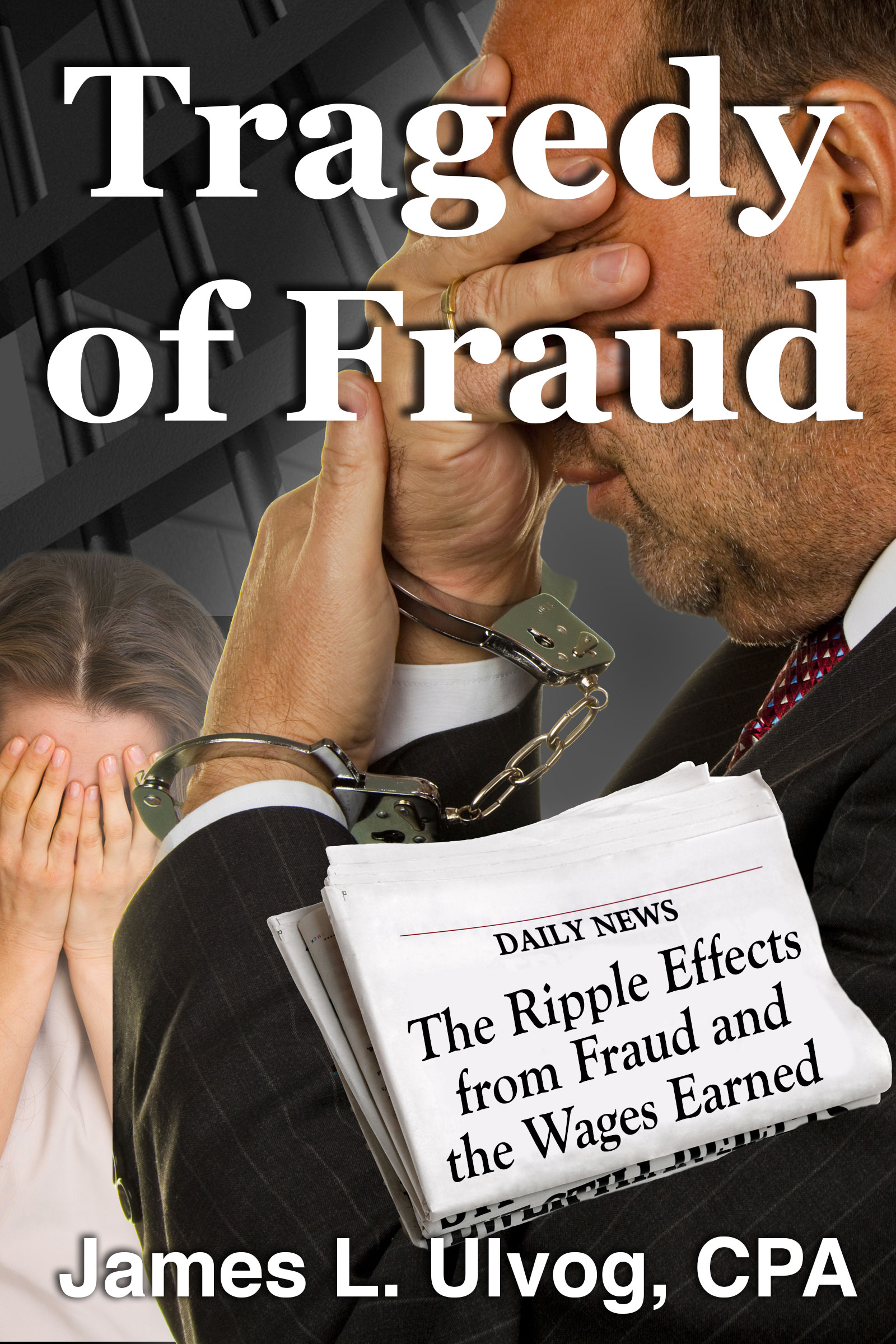 Tragedy of Fraud – The Ripple Effects from Fraud and the Wages Earned – Consequences of fraud spread far. There is a long list of well-earned wages from fraud that will be paid in full.

Available in your preferred format: