Another way to keep track of inflation trends is by watching the price index for the Personal Consumption Expenditure.

Please journey along with me as I continue my education.

In the news yesterday was the April increase which showed a 3.1% year-over-year increase compared to an expectation of a 2.9% increase. For one article discussing the news, check out the following:

I have started to track this data, gathering information back to the start of 2020. The month by month change in the headline index and the core index (which excludes food and energy costs) can be seen in the graph at the top of this post.

Before look at the year-over-year change, we need to look at the nature of the index. There are two main indices used to monitor inflation. The first is the Consumer Price Index (CPI) which everyone knows about. The other is the Personal Consumption Expenditures (PCE).

The number of new claims for unemployment for week ending 3/13/21 increased 45,000 after decling 29,000 the prior week. Those weekly changes are in the range of what has happened over the last six months. In other words, not a lot of improvement with plenty of ups and downs in the weekly new-claims tally.

For context consider before the economic shutdown the new claims averaged about 220K per week, so after all these months of improvements we are still running about four times the previous norm.

Why this ongoing discussion?

If we’re going to understand what is happening in the economy we need to dive deeper into the numbers. For those of us who are CPAs providing audits and reviews, it helps us to have a deeper understanding of the overall economy.

Ponder the following graphs and you can make your own assessment.

Feel free to laugh. Or cry if you wish. Two more politicians demonstrate they are exempt from the rules they require us lowly, common peasants to follow.

Also, two politicians realize it, um, maybe, possibly, is time to get the economy started. Oh yeah, that is in spite of infection rate spike in New York State.

Today’s source of entertainment which would be funny if the human impact from the lockdowns had not been so devastating for the last 10 months:

12/23/20 – Red State – NC Official Says She Will Travel For Christmas After Telling Residents To Stay Home. Her Justification Is Priceless – Behold the power of rationalization.

END_OF_DOCUMENT_TOKEN_TO_BE_REPLACED 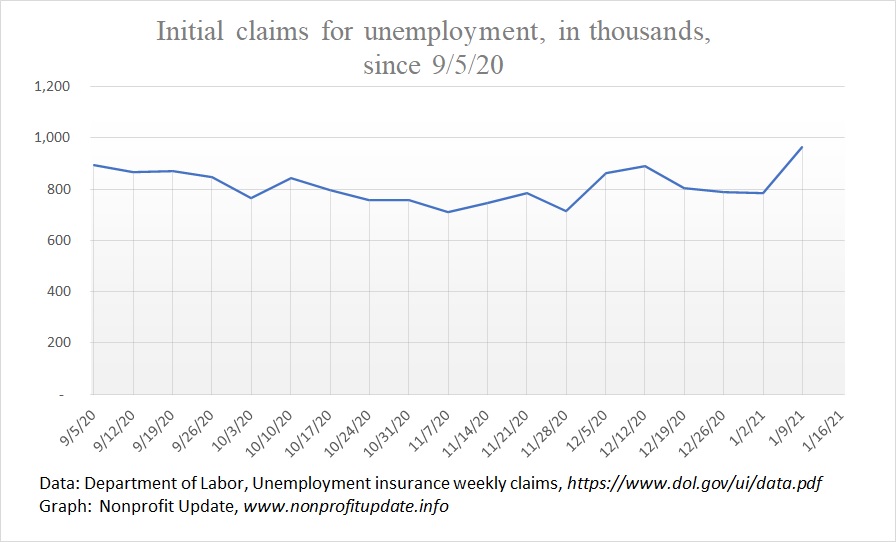 Keep in mind that before the shutdown of the economy the new claims averaged about 220K per week, so we are now running more than four times the previous norm.

The number of continuing claims for unemployment has been slowly dropping but increased for the week ending 1/2/21.

Article at Wall Street Journal on 1/14/21 reports US Unemployment Claims Rise as Pandemic Weighs on Economy. Article link indicates the consensus is the increasing virus count combined with increasing restrictions on businesses caused the jump in new unemployment claims.

Article says there are other economic indicators suggesting the economy is slowing down again. Stats such as small business optimism, new home sales, existing home sales, household income, and household spending point towards a slowdown.

New claims for unemployment by week since the start of 2020:

END_OF_DOCUMENT_TOKEN_TO_BE_REPLACED

How much does it cost for a pharmaceutical company to get one new drug onto the market? As with all variations of “what does it cost” questions the answer is complicated. Any such answer requires explanation of what the calculation means.

Other posts discussing this issue:

According to a 2016 study by Tufts Center for the Study of Drug Development, here is their calculation of what it takes to get one compound to the point of where it is approved for sale:

END_OF_DOCUMENT_TOKEN_TO_BE_REPLACED

The number of people working in manufacturing has been declining for many years. Those job losses will continue at the same time as technology disrupts other industries causing the loss of more jobs.

This is not a new concept. Technological advances have devastated farm employment over the last 150 years.

Prof. Thomas Tunstall pondered Where the New Jobs Will Come From. Sub headline on his 11/4/15 article said:

In 2007 iPhone application developers didn’t exist. By 2011 Apple had $15 billion in mobile-app revenues.

Consider the percentage of the population employed in agriculture over time: END_OF_DOCUMENT_TOKEN_TO_BE_REPLACED

When I look at the political news or any news in general I get very pessimistic about our future.

In contrast, when I look at the amazing things happening beyond the headlines in today’s newspaper I feel incredibly optimistic.

Consider that private companies are developing the technology for space exploration. Consider the energy revolution created by hydraulic fracturing and horizontal drilling. Consider radical changes in technology that are making so many things easier, faster, and cheaper. Consider that anyone that wants to do so can publish their own book, distribute their own music, or create a feature movie.

As a tiny illustration, look at my company and pastimes. Technology allows me to run a high quality CPA practice without any staff. In my spare time I am a publisher and journalist. Anyone in Europe or North America or most of Asia could easily do the same and at minimal cost.

When I look at long-term economic trends I am incredibly optimistic.

For yet one more explanation of why that is the case, consider a column by Glenn Reynolds at USA Today: Actually, things are pretty good / Free markets and free inquiry have changed the historic ‘norms’ of poverty and violence.

END_OF_DOCUMENT_TOKEN_TO_BE_REPLACED

Why have we seen such dramatic improvement in average wealth and average life expectancy everywhere in the last 100 or 200 years? What has led to a radical reduction in the number of people living in dirt-eating poverty in the last 50 years?

Over the last few years I have focused a lot of my reading on economics and history trying to figure out the answers to those questions. Why?

If we figure out the answer to those questions we can continue in the same direction. If we sort out how we got here, we can share that strategy with those who have not shared in the progress. If you want a different phrasing, we can radically narrow economic inequality within countries and between countries if we can answer those questions. We can help get even more people out of dirt-eating poverty.

I think those goals are in the back of the mind for most readers of this blog.

END_OF_DOCUMENT_TOKEN_TO_BE_REPLACED

That headline is my feeble summary of a superb 6,000 word article at the New Republic by Michael Hobbes: Stop Trying to Save the World – Big ideas are destroying international development.

In the last year he has read all the books on the shortfalls in development he can find.

The article covers a lot of ground. Here are the three biggest points for me:

There is no silver bullet that will fix all problems or work in all situations.

We need to modify our expectations that we can find a silver bullet.

Projects that work splendidly in one specific location in one set of circumstances won’t scale up by a factor of a thousand and might not do any good if you roll it out across the country.

I often talk of unintended consequences.

END_OF_DOCUMENT_TOKEN_TO_BE_REPLACED

That is the core point made by Dr. Mo Ibrahim on how to develop the economies of all 57 African countries. He explains his ideas at: Mo Ibrahim On How (And Why) Africa Should Solve Its Own Problems.

He wonders why African people are so poor. He thinks of where Ghana, Egypt, China, India, and Singapore were 50 years ago. Then, Ghana and Egypt were the richest countries of those five. Look how far the other three have advanced.

The problem is bad governance in both the public and private sectors.

END_OF_DOCUMENT_TOKEN_TO_BE_REPLACED

Remember the rapping economists we saw here and here?  They’re back!

Just in time for Christmas, EconStories imagines their fantasy Christmas album featuring the classic hits from Keynes, Hayek, and other renown singers you know and love.

Enjoy the greatest collection of economic hits ever aggregated.

Remember, the only one who has the power to create presents out of thin air is Santa himself.

If you want a few 20 second explanations of how to slow or increase the economy, check out the new interpretations of your favorite songs of the season.

Link, if you need it: http://www.youtube.com/watch?feature=player_profilepage&v=7uKnd6IEiO0#t=41s

In The Broken “Buy-One, Give-One” Model: 3 Ways to Save Toms Shoes author Cheryl Davenport provides a concise description of the underlying problem with the TOMS model.

There’s a huge number of articles out there describing the conceptual issues.  Ms. Davenport has a great recap:

First, the Toms buy-one-give-one model does not actually solve a social problem. Rather, the charitable act of donating a free pair of shoes serves as little more than a short-term fix in a system in need of long-term, multi-faceted economic development, health, sanitation, and education solutions.

END_OF_DOCUMENT_TOKEN_TO_BE_REPLACED

Some things are exquisitely complicated.  Making changes, fixing problems, or making improvements to such things is really difficult.

Unintended consequences result when you do something simple in a complex system.

Came across a superb illustration of the challenge of dealing with complexity. In his post The Health Care Disaster and the Miseries of Blue, Walter Russell Mead compares the US healthcare system to a jungle ecosystem.