Casting my CPA eye on the 1946 probate document for my grandfather’s estate led to a series of posts on my other blog describing what we can learn about farming in the 1940s from a legal filing.  Those posts have been combined into one section of my newest book: An Ulvog Journey.

The book also provides recollections of growing up a South Dakota farm in the 1930s and 1940s, written by my dad and his seven siblings.

One of my uncles, Carl Ulvog, was a captivating storyteller. His autobiographic tale of experiences in the South Pacific during World War II are also included.

Description from back page of the book:

END_OF_DOCUMENT_TOKEN_TO_BE_REPLACED 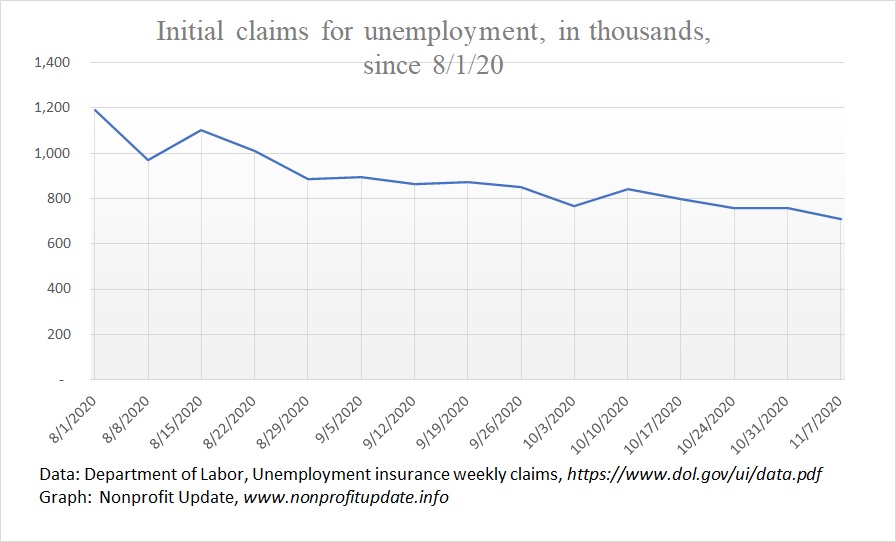 The number of new claims for unemployment for week ending 11/7/20 again declined. This is the fourth weekly decline, with drops in eight of the last fifteen weeks.  New claims are 709K, a 48K drop for the week.

Remember that before the government induced shutdown of the economy the new claims averaged about 220K per week so we are still running more than three times the previous norm.

The number of continuing claims for unemployment is continuing to drop. Large part of the drop is people going back to work. Part of it is people dropping off the state-level unemployment rolls exhausting coverage.

On 11/12/20, the Wall Street Journal reported U.S. Unemployment Claims Slip but Hold at High Levels. Article asserts the declining new claims and drop in ongoing claims indicates the economy is in a good recovery. Consensus of economists spoken to for the article indicate economy is on a better tract recovery now then the expectations were a few months ago. Current expectation is the GDP will drop 2.7% for the year which is better than the 3.6% expected just last month.

Article suggests that recovery is better than expected.

Tally of people who are now in the extended 13 weeks covered at the federal level is rising rapidly. Here is a recap:

END_OF_DOCUMENT_TOKEN_TO_BE_REPLACED

Every day there are fresh reports of the devastating impact from the shutdown of the economy. Damage is widespread. Impact is growing.

Just a few of the recent articles:

There is a severe cost to be paid from early mistakes and ongoing mistakes by a wide range of government officials.

10/15/20 – Wall Street Journal – Covid-19 Outbreaks Led to Dangerous Delay in Cancer Diagnoses – The closing of many health facilities meant regular screenings for cancer were not available for several months this past spring. Next, widespread panic kept people away from doctors’ offices. One insurance company reports the number of daily screenings for colorectal cancer dropped between 50% and 80% for about three months.

Only at the end of August was the number of screenings back to the normal amount compared to prior years.

A cancer care provider reports an increased number of patients are arriving with advanced stages of cancer.

END_OF_DOCUMENT_TOKEN_TO_BE_REPLACED

Economic damage from the shutdown is becoming more obvious as more reporters spend time covering the destruction. Here are two articles each on the overall economic impact, specific impact on individuals, and concentrated impact on two cities:

How long will we let this go on?

Broad indication of the damage: 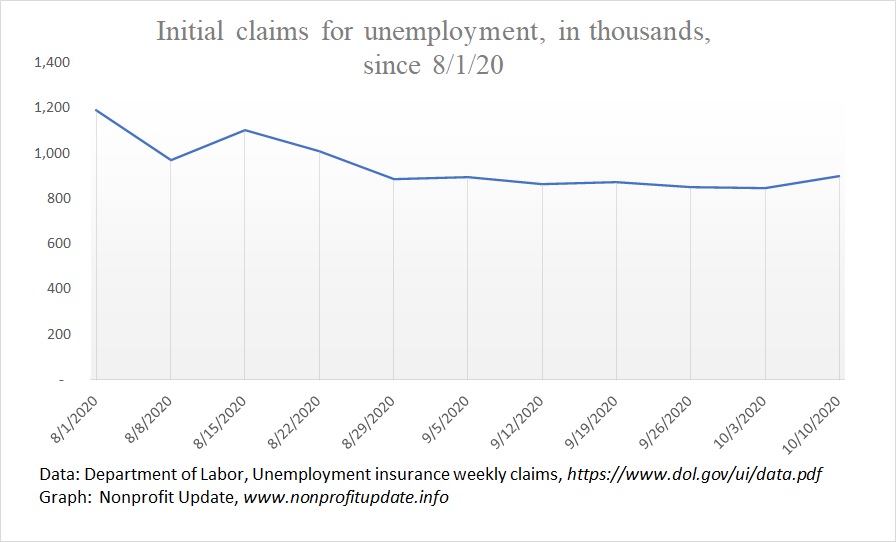 The number of new claims for unemployment for week ending 10/10/20 increased, which offset net declines of the preceding five weeks. New claims are 898K, a 53K increase over the revised tally for previous week of 845K.

Keep in mind before the government induced shutdown of the economy new claims averaged about 220K per week so we are still running about four times the previous norm.

The number of continuing claims for unemployment is continuing to drop. I’m not sure why this is. Part is due to people going back to work. Part of it is people dropping off the state-level unemployment rolls after the 13 weeks of coverage.

END_OF_DOCUMENT_TOKEN_TO_BE_REPLACED

Summarized below are a few of the recent articles pointing to expanding economic damage from the shutdown. Destruction in the movie business is noticeable in recent days:

10/5/20 – Wall Street Journal – Regal Cinemas Suspending Operations at All US Locations – The chain with the second largest number of theaters in the U.S. has closed all of its US theaters after having reopened only two months ago. Article does not indicate when any of the theaters will be reopened.

Article says release dates for a dozen movies have been postponed.

END_OF_DOCUMENT_TOKEN_TO_BE_REPLACED 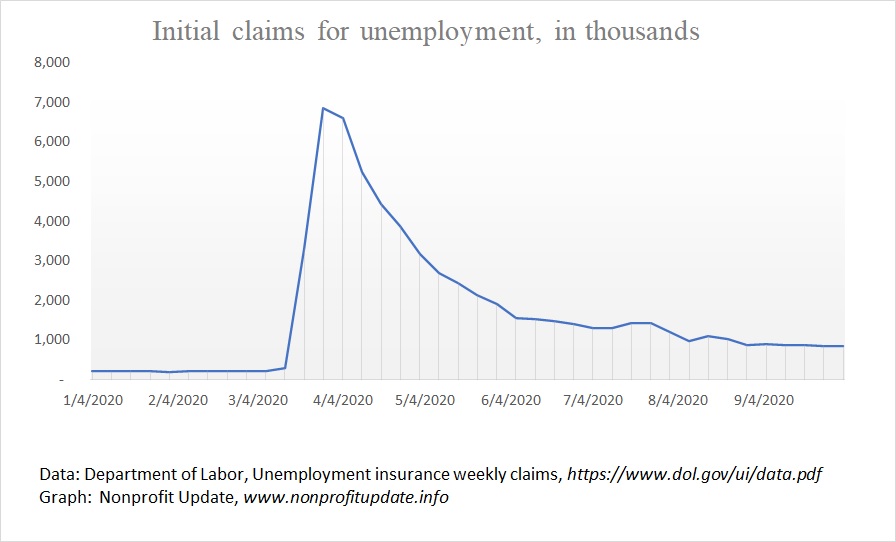 To again put this in context, before the government induced shutdown of the economy new claims averaged about 220K per week.

The number of continuing claims for unemployment is continuing to drop. I’m not sure why this is. Part is due to people going back to work.

END_OF_DOCUMENT_TOKEN_TO_BE_REPLACED

One of the frustrations I have experienced as an auditor is the statistical information made visible by the AICPA and publications from others is that the economic data mentioned routinely lags behind two or three quarters on the date it is published.  Another trade association reports giving trends in the religious communities, but the survey information is provided late in the year for the prior calendar year.

The result is when I’m working on an audit or review several months later, the readily available economic data is from the start of the fiscal year I’m analyzing. Sometimes the data is for the prior fiscal year I’m considering. That doesn’t do me much good.

Long time ago I came across a comment that CPAs ought to start tracking key economic indicators on their own.

What a great idea!

END_OF_DOCUMENT_TOKEN_TO_BE_REPLACED

Indications are starting to emerge that the answer to the question may actually be no.

The following study suggests the lockdowns have no correlation to when the infection rates hit that transition point. In fact, the inflection point normally is reached before the lockdowns could have had any impact.

10/4/20 – National Review – Stats Hold a Surprise: Lockdowns May Have Had Little Effect on Covid-19 Spread –

END_OF_DOCUMENT_TOKEN_TO_BE_REPLACED

Amongst the extremes we are seeing during the shutdown, that 0.5% drop is the smallest monthly decline since the peak in April.

Check out the extreme swings in the U-3 unemployment rate over the last 7 months:

END_OF_DOCUMENT_TOKEN_TO_BE_REPLACED 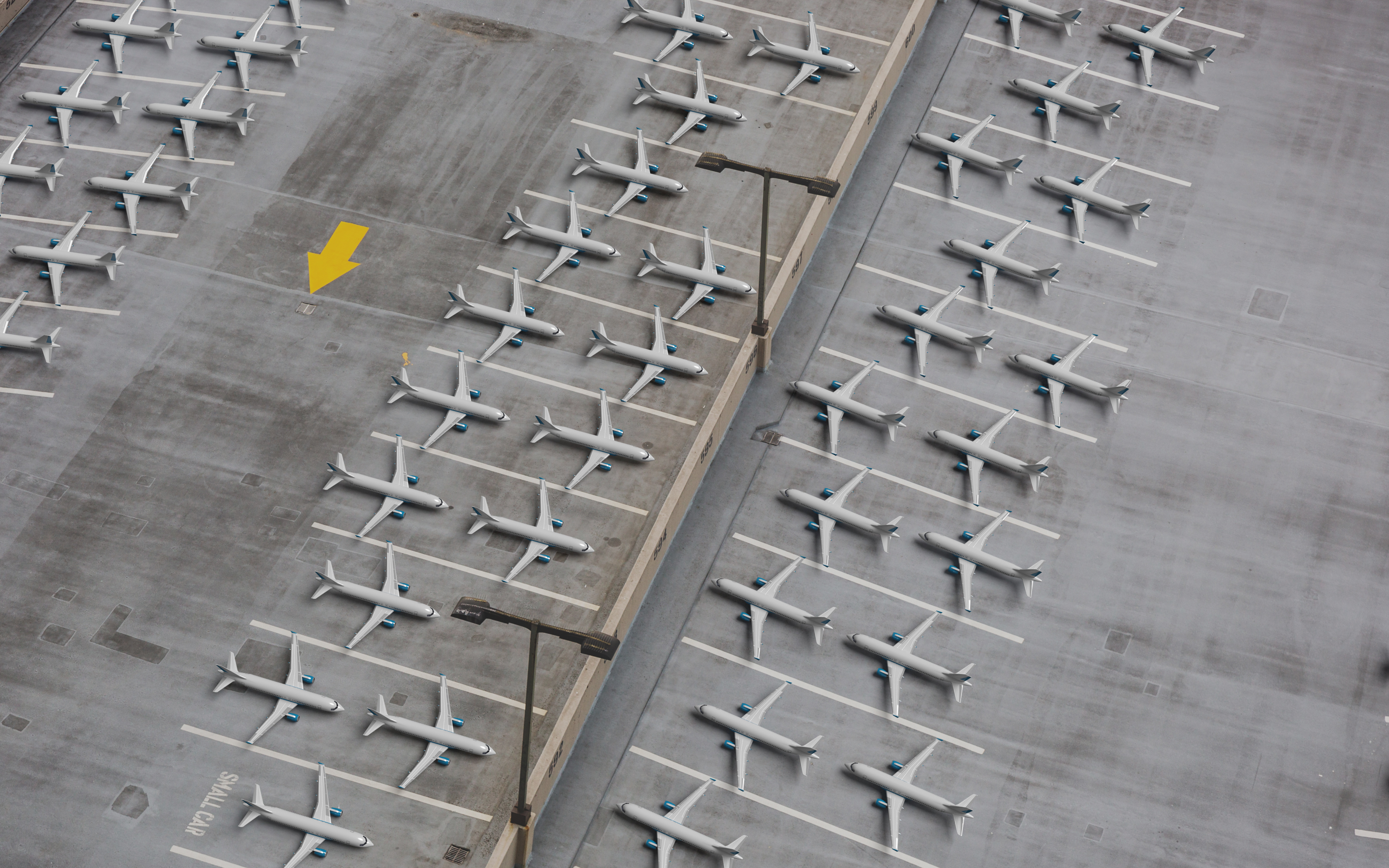 The bad news on the economy called for the shutdown just keeps growing but there is a hint of good news in the near future.

9/30/20 – CNBC – US economy plunges 31.4% in the second quarter but a big rebound is expected – Commerce Department calculations of Gross Domestic Product (GDP) for the second quarter were revised, which is routine, dropping from an annualized contraction of 31.7% down just a little to 31.4% reduction in GDP.

END_OF_DOCUMENT_TOKEN_TO_BE_REPLACED

The number of new claims for unemployment for week ending 9/26/20 has been about the same over the last five weeks, in the mid- to high 800 thousands. Last big drop was the week of 8/29/20. To again put this in context, before the government induced shutdown of the economy new claims averaged about 220,000 per week.

Good  news is the number of continuing claims for unemployment is continuing to drop, which means that more people are going back to work than loosing their job.

The devastating impact of the economic shutdown continues to be painfully obvious.

Starting this week that way the information is presented for this ongoing analysis will be in graphs.

END_OF_DOCUMENT_TOKEN_TO_BE_REPLACED

It is sad to personally observe the economic devastation from the shutdown.

We spent a few days in San Diego last week. Stayed at a hotel downtown near the harbor. Saw several things showing the severity of the economic damage.

For quite a long time airplanes have not been allowed to leave San Diego International Airport until 6:30. It is funny to hear the first engine rev up a few seconds after 6:30 a.m.

I have noticed on previous vacations that there is a string of airplanes lined up ready to leave right at the stroke at 6:30. The planes take off approximately 1 minute apart.

END_OF_DOCUMENT_TOKEN_TO_BE_REPLACED

We have been locked down long enough for the volume of statistics to build up to the point of allowing deeper analysis. As is always the case, the statistics can also be manipulated to give whatever answer you want. Deeper, honest analysis is starting to show surprising results, for example, the lack of correlation between infection rates and lockdown policies.

Surprising results on the low correlation will be mentioned after some game playing is described.

The annual motorcycle rally in Sturgis, South Dakota routinely draws huge numbers of people to the town, whose population is only 7,000 people. Attendance at the 10-day event this year was lower than usual with an estimated 460,000 motorcycle enthusiasts hanging around.

END_OF_DOCUMENT_TOKEN_TO_BE_REPLACED

The comment that shutting down the economy represents a trade-off of lives versus jobs is an invalid comparison.

The real trade-off from a shutdown is lives versus lives.

People are dying because of the shutdown. The shutdown is killing people.

It is time to open the economy.

I don’t have time to summarize all the articles I have read making this point. Here are just three examples.

The pandemic is killing dementia patients

Washington Post – 9/16/20 – Pandemic isolation has killed thousands of Alzheimer’s patients while families watch from afar – The Washington Post, the Post, studied data from CDC to identify there have been 13,200 excess deaths from Alzheimer’s and dementia since the shutdown started. Excess deaths are the extra deaths over the number that would otherwise be expected because of some particular situation.