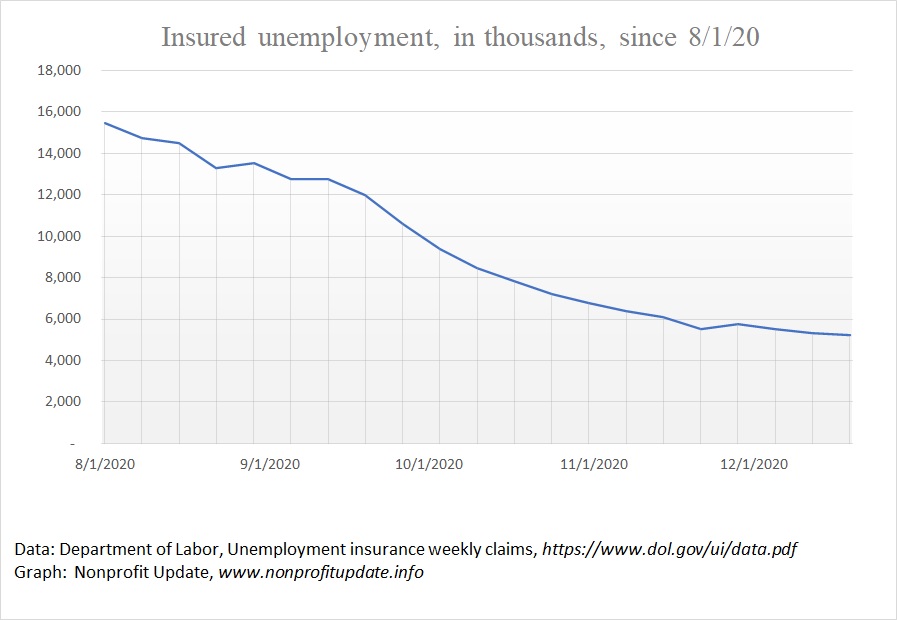 The number of new claims for unemployment for week ending 12/26/20 declined for a secone weeks in a row. New claims are 787K, a 19K drop for the week.

For contrast, remember that before the government induced shutdown of the economy the new claims averaged about 220K per week so we are still running three or four times the previous norm.

When a person exhausts the state level coverage, they become eligible for the extended federal benefits, called the Pandemic Emergency Unemployment Compensation program.

The holidays can create “noise” in the statistics. Uncertainty about the new so-called stimulus package in Congress creates uncertainty for business, employees, and the unemployed. All that means the data is a bit fuzzier for the couple of weeks surrounding Christmas and New Year’s.

The number of new unemployed has been hovering in the 700,000s and 800,000s for several months. That suggests to me that the economy is stalling, or at least the recovery is rather weak. 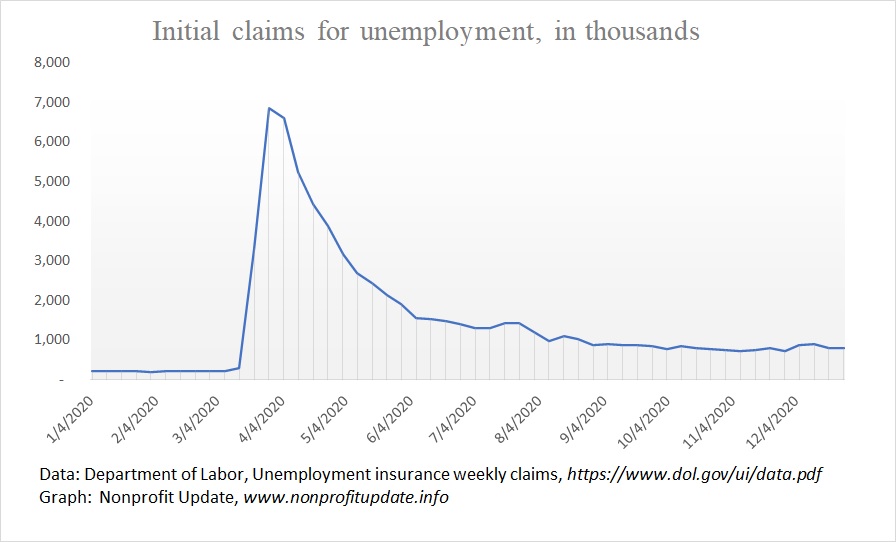 With the scale of layoffs this year, do you notice the first part of the line that seems to be near zero? That was the normal amount of new claims before the shutdown.

Top of this post shows a graph looking closer at the new claims since 9/5//20.

The number of people covered by unemployment insurance who are drawing checks is extremely high, but is continuing to drop, even if slowly. This is labeled as the number of insured unemployed. People going into the extended benefits program at the federal level offset a large portion of the drop.

Continuing claims for the year: 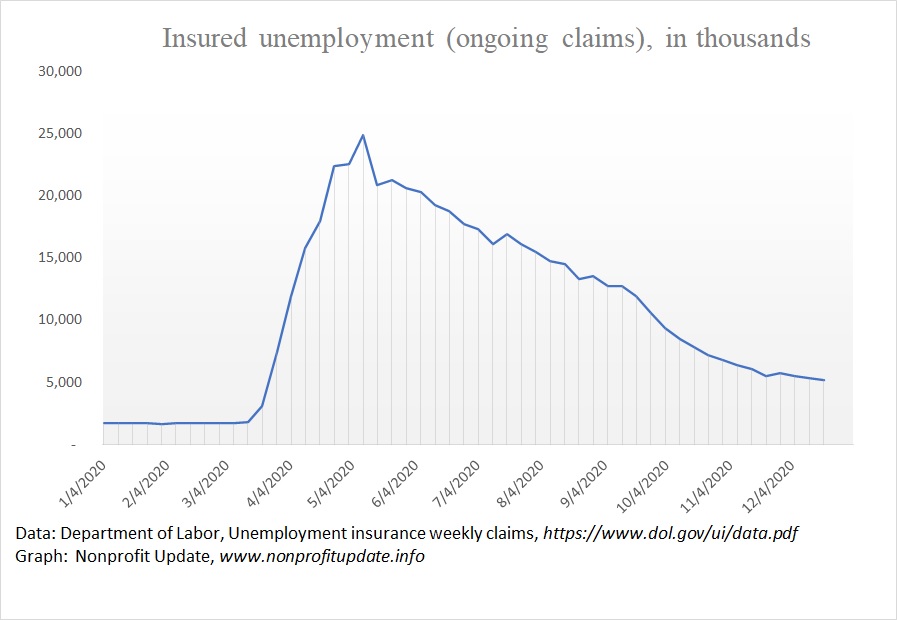 Here is a closer look at the continuing claims at the state level only since 8/1/20:

This is where I get confused. Adding in the federal claims shows the recovery in the economy is not very strong.

Tally of people who are now in the extended 13 weeks covered at the federal level is offsetting a portion of the drop in state-level. Here is a recap 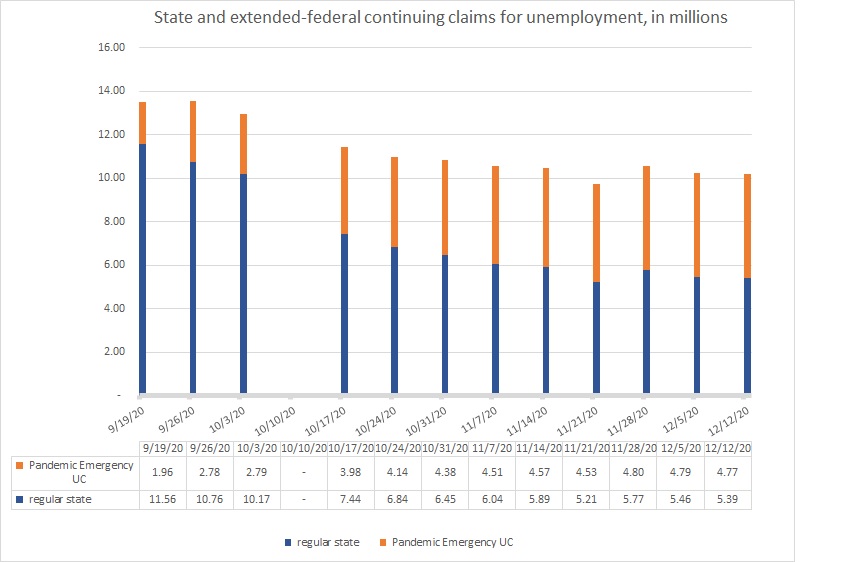 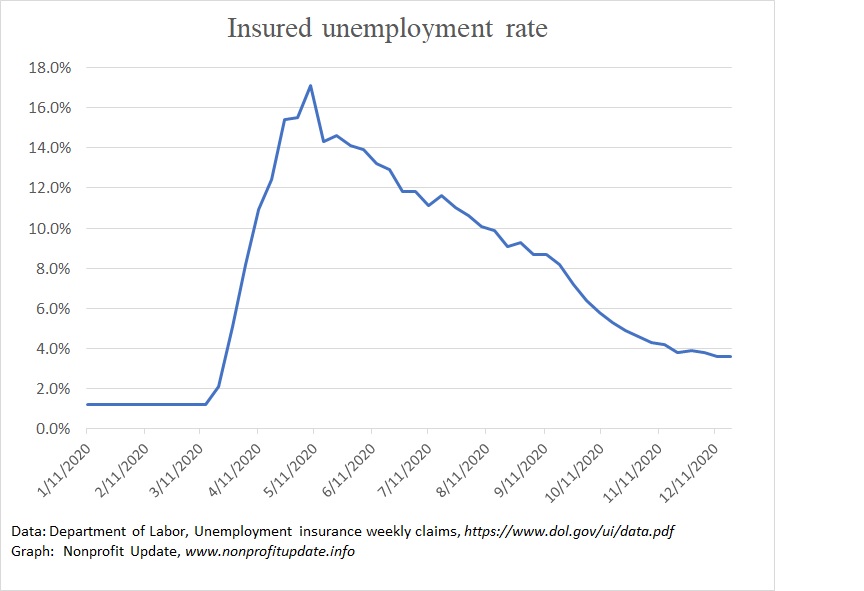