Lots of things in the news this week. Here are a few things that caught my eye, including Steve Nardizzi and Al Giordano starting to speak out on public platforms.

Public service announcement ads – You can find the Youtube feed of the WWP PSAs here. Brian Mittendorf asked to see the PSAs and WWP provided the link.

Ponder ads in light of ASC 958-720-45 requirements. There is huge room for discussion here. As a tip for enterprising reporters, here are my two tweets: 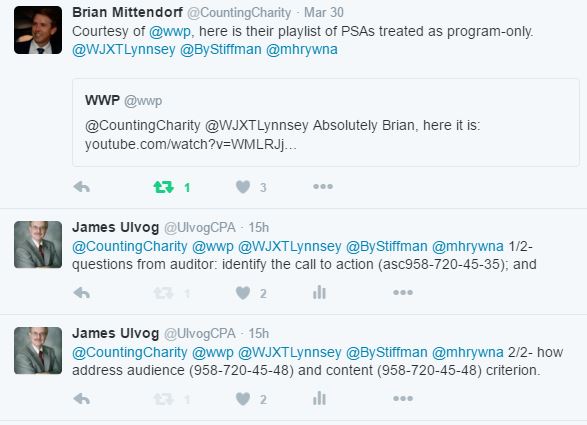 They also started a blog: The Wounded Truth. If you are interested enough to still be reading, you might want to add the blog to your RSS feed.

3/30 – Stars and Stripes – Feud erupts at Wounded Warrior Project between board and founder – WWP founder John Melia has publicly called for the resignation of WWP board chair Anthony Odierno. Reason for the call for resignation is that a meeting which had been scheduled on April 4 between the board and Mr. Melia was cancelled by the board.

Article says the board issued a statement on 3/30 that Mr. Melia requested the meeting and the board agreed to do so on the condition that the meeting was “confidential and not publicized.” WWP says that within hours news reports appeared mentioning the meeting was going to take place.

3/31 – The Chronicle of Philanthropy – Nonprofits Fear Dan Pallotta’s Efforts to Defend Charity’s Spending – Article has moved behind paywall since I read the full article yesterday, so I can’t read it a second time before making a comment.

My recollection is that a variety of named and unnamed nonprofit leaders are trying to disassociate themselves from either Mr. Pallotta’s style or from his message.

Without any indication of the irony, the article quoted a named executive of a trade association criticizing Charity Defense Council for defending an organization that provides most of CDC’s  funding.

3/30 – Stephen Nardizzi and Al Giordano op-ed at Washington Examiner – The wounded truth about the Wounded Warrior Project – The fired executives provide their perspective.

A few tidbits they pointed out:

They believe that what they call sloppy and inaccurate reporting is not the most serious issue driving the controversy. Of more concern is the idea the charities cannot spend more than a certain amount of donated money on supporting services (general & administrative and fundraising).

They point out that WWP programs grew 50% year after year. Here’s their description of spending in dollars and number of program participants served:

Their point is you cannot see that level of growth without spending serious dollars on fundraising. In their words

The truth is that without reasonable investments in fundraising and administration, charities like the WWP would accomplish far less for fewer veterans. The WWP was a small organization when it set its goal to impact a generation of warriors.

Early in the article they cited a statistic indicating there are 700,000 warriors who have returned from the field requiring care from the VA.

Their point is that if you want your organization to go from serving a few thousand people to having a major impact on a large portion of a pool of 700,000 wounded warriors, you are going to have to have a huge amount of money.

The question to be considered by all is whether that growth in revenue will happen by sending out a monthly appeal letter and a few TV ads or whether that level of growth will require a dramatic amount of intentional effort to find donors.

It is an open question. That is the core of this debate.

What is your answer on how to raise enough money to help a large portion of those warriors who the VA won’t help anymore?

Assume your organization has adopted a massive goal of changing the world or impacting a huge population. How would you propose raising enough money to achieve the goal?