The IRS took serious exception to the methodology used by Food for the Hungry in preparing its tax return for the fiscal year ending September 30, 2008. The IRS audit of that 990 ran for years.

On March 24, 2014, the ministry announced the IRS closed their audit. The ministry says it did not have to file an amended return but did agree to change the way that it was accounting for gifts in kind.

Now that tax returns are available through the 2014 fiscal year, we can see enough 990s to develop a case study about how much it costs to respond to a major challenge from the IRS.

Why the big deal?

To show the magnitude of the issues at hand, you may pull the charity’s pro-forma calculation of revenue for 2007 through 2009. In this post, I explained where to find the spreadsheet.

I pulled together the reported and pro forma amounts. I added in the 2006 and 2010 amounts of total revenue from those years’ 990 to give a longer time horizon.

Here are the amounts of total revenue, as actually reported on 990s through 2009 as well as total revenue on a pro forma basis from 2007 through 2009. The difference between those two lines reflect the difference between the valuation method for donated medicines that was in use through 2009 and the revised methodology used later. The 2010 amount is actual from 990 under the new methodology. All amounts in millions of dollars.

Here are the amounts:

Here’s a graph showing those numbers: 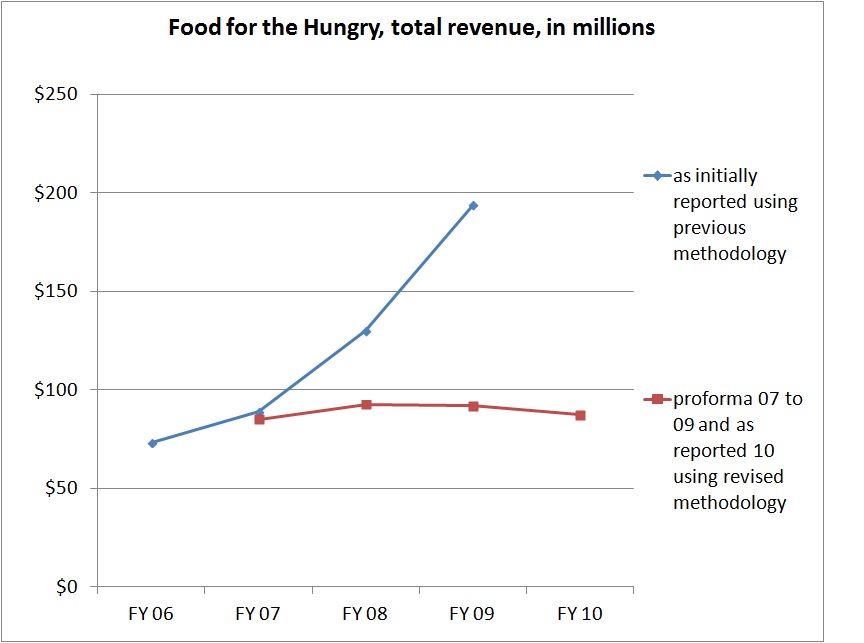 You can see a material difference between the methods in 2008. The difference grew even larger in 2009, with pro forma revision at less than half of what was initially reported. Keep in mind it was the fiscal 2008 numbers under audit by the IRS.

From my perspective, the ramifications from this audit were significant. As an educated guess, I think that if the IRS had not closed the case in the manner as reported by the organization, the IRS would have next opened an audit of 2009. As a further guess, and it is only my guess, if the IRS had succeeded in levying a fine and forcing an actual restatement for 2008, there are a large number of other charities who would have shortly received audit notices. As one final guess, the high stakes are why both the organization and IRS pushed so aggressively on this audit.

Costs involved to respond to the IRS audit

The 2014 audited financial statements are available at the Food for the Hungry website on this page. The 990 for 2014 is not available there as of July 1, even though the return was signed on March 31, 2015.

You may find the 990 and audited financial statements for 2014 at the New York State Office of the Attorney General Charities Bureau Registration Section. That is one of many good places to go if you’re looking for financial information when charities haven’t made the information available at their website.

Since the IRS audit was resolved in 2014 and that year’s 990 is available (courtesy of the New York AG), we can now look at the total cost incurred by the organization related to dealing with the IRS audit.

Here are the legal and accounting costs from the 990s. Remember the audit kicked off in 2011, so to give a baseline, I will drop the ’07 and ’08 amounts for further analysis. Those amounts are included here to show the pattern of expenses.

Here are the total accounting and legal costs for those years:

Here are the accounting costs by category:

Trusting that the costs are allocated correctly (not always an easy assumption when reading a 990, but easy to do knowing the CPA firm that is involved here), it looks to me like the amounts in the G&A column represent the fees for the regular financial audit and tax returns. The amounts in the program column look like the fees paid to address the tax audit. The organization’s CFO previously indicated to me the organization did not have enough staffing to address this internally, so assistance was obtained from outside accountants.

I think the correct way to approximate the legal costs to address the IRS audit is to accumulate the increase in combined legal fees charged to program and G&A over the 2010 base year. I think it would be appropriate to exclude the amount of legal costs allocated to fundraising.

Here are the amounts for legal fees paid to outside counsel by category, according to the tax returns:

Aggregating the program and G&A for legal fees and calculating the increase over the base year gives these amounts:

Here are the amounts for accounting related to the IRS audit, which I believe was paid to the CPA firm. (This is the point at which someone else can raise a discussion about independence since the IRS audit challenges to the 990 are also a challenge to the appropriateness of the audit opinion for 2008):

This gives an approximated total cost for external professionals through 9/30/14 of:

Here is my aggregation of estimated costs by year:

That puts the tally for the ministry to address the IRS challenge to their valuation of GIK at about $475,000 for outside professional fees. Add to that an unidentified amount for internal staff time and the total bill to defend those high valuations from IRS challenge is well over half a million dollars.

I will revisit the comments that I have made several times before:

Many years ago, I worked for the accounting firm that audited this organization. All of the above years were audited by that firm. I worked on the audit of this organization around 15 or 20 years ago. My involvement was limited to reviewing the report and workpapers before the audit opinion was released.

I have no personal knowledge or inside knowledge or any other kind of knowledge of the Food for the Hungry accounting  since I left the firm 13 years ago. I have no knowledge of the audit engagements since then other than what can be learned from reading the recent audited financial statements.  It is worth noting that since I started covering this story, I have read a copy of the revenue officer’s report on the tax audit.

While I was at the firm, the ministry’s current CFO and the current and preceding audit partners on the engagement were colleagues of mine (the partner’s names are not currently in public discussion so won’t be mentioned here).

Currently I am a competitor to this accounting firm in providing attestation and tax services to the religious nonprofit community.

I choose not to mention the name of the firm. They are not part of the current or previous public discussion. If you have been following this issue, you already know their name. If it matters to you, their name can be found with a few mouse clicks.

With those disclosures, you may filter or reinterpret or ignore my comments as you wish.

Let me know if I made an arithmetic or transposition error.

Any suggestions on how to revise or improve my calculations above?

All comments welcome (subject to maintaining a minimum level of professionalism).

Update 7/6 – On the morning of 7/2, I requested comment from the ministry on this post. If I receive a reply which they wish to post, I will update the discussion.

One thought on “What it costs to deal with a major IRS audit. Case study from Food for the Hungry.”