Previously I’ve discussed the impact of new accounting rules on valuing of deworming medicine.  Have been looking at Feed the Children financial statements to quantify the impact.

I am not picking on Feed the Children.

It is my guess, just a guess, that the same underlying valuation issues and impact on supporting services ratio that I have described previously here and here, would also be present in the financial information for other organizations that have large volumes of deworming medicine.  If I can find good info, I’ll do some calculations on other sets of financials.

I have a few more observations and then one more set of calculations.

Deworming meds as percent of revenue in 2009

For Feed the Children, the deworming medicine is a major component of revenue and program expense.  Let me describe how major.

The 2009 financial statements disclose the mebendazole was valued at $544M.  Those meds would have been revalued at $21M if the new methodology were applied according to the notes to the financials.

So here are my calculations.

This one particular deworming medicine, at $544M, represents:

Based on publicly available information, mebendazole deworming medicine represents three-fourths of the donated meds and just under one-half of total revenue for 2009.

What if the worldwide price is used?

The change in per-pill valuation is described by William P. Barrett in his Forbes article, Donated Pills Make Some Charities Look Too Good On Paper.

For example, earlier this year Oklahoma City-based Feed the Children announced that its latest yearly GIK contributions dropped by $668 million—a stunning 60% fall—mostly due to its lowering of deworming valuation from $9.07 to 35 cents. But that’s still 1,600% above the world market price. No stranger to scandal, the charity, a pioneering longtime distributor of deworming pills using high values, is no longer among the country’s ten largest.

Combining those two sets of information means there were about 60M mebendazole pills included in revenue for 2009.

Mr. Bennett’s article above mentions some of the specific changes in valuation.  For the following organizations, he describes the valuations used for deworming meds before and after SFAS 157 :

He also mentions that the worldwide price is about 2 cents. I’ll explore that in a later post.

In the meantime, I was wondering what the impact would be of using the worldwide price of $0.02 instead of something in the range of $0.35 to $2.00.

So, I went back to the Feed the Children financial statements for 2009 and adjusted to a valuation of $0.04.  (I’ll double the rate cited in the article – being cautious in estimates is an old habit that dies hard for us CPAs. Besides, the difference between $0.04 and $.02 is minimal.).

I used the same spreadsheet I used earlier to quantify the impact.  I’ll show my work at the end of this post.

You can see the biggest impact, a drop of $523M, is the first step.  The second step, cutting down to four cents, only reduces income and program expense by $18.6M.

Impact on the program and supporting services expenses is also proportionately smaller.

Dropping the mebendazole valuation down to $0.04 would increase the supporting services to 12.4%, an increase of only 0.3%.

So I think the impact of dropping down to worldwide prices would be minor compared to the adjustments that have already been made.

I am guessing we would see the same relative impact for World Vision, MAP International, Food for the Hungry, and any other NPO that has a large volume of deworming meds if we could find enough publicly available information to do the same calculations for them.  The proportionate impact would vary based on the portion of revenue from mebendazole and the adjusted per-pill price in use.

I said I’d show my work.  Feel free to check my math and logic.  Here it is: 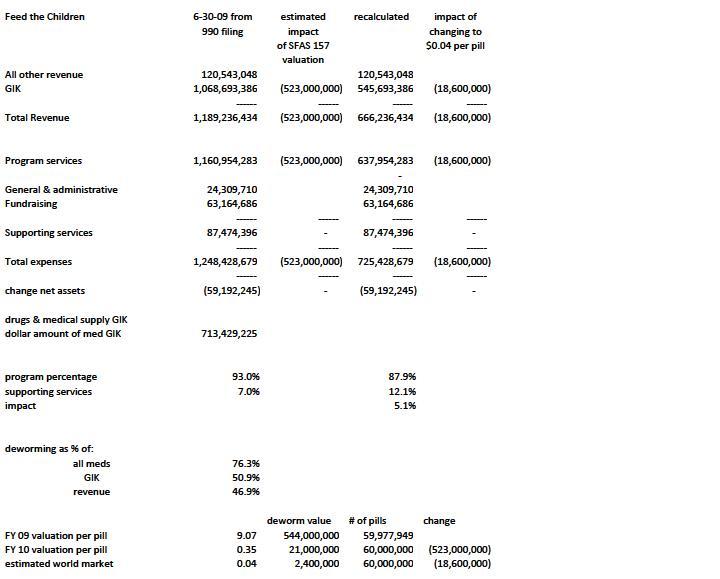